Orders from outside the UK are not subjected to VAT 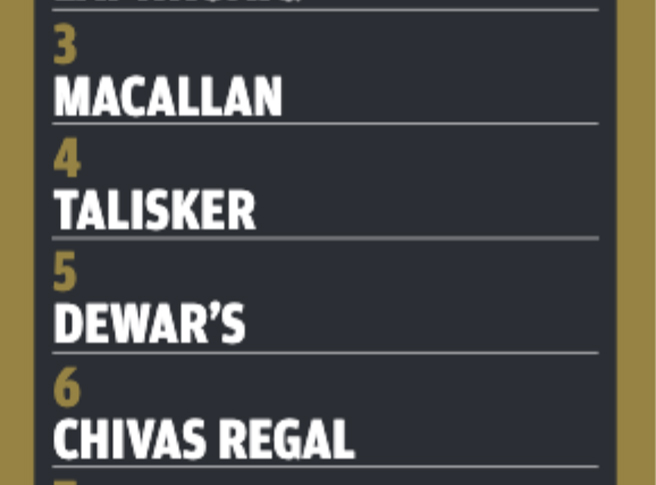 Johnnie Walker is the big beast of these parts- it’s topped the poll 10 of the past 11 times. As the biggest-selling scotch globally and backed by Diageo’s distribution and bar-world contacts, it’s no surprise this grand old brand is dominating. In about a quarter of bars, Johnnie Walker was found to be the house pour, and a top-three choice in a third. So while Walker walked it this year, we’ve seen further consolidation of popularity for the malts that lie beneath it. Making up the top four are Laphroaig, The Macallan and Talisker.

In the past few years of this report we have spoken of how bartenders have moved on from the thinking that blends are more mixable than malts, with seven of the bestselling 10 this year single malts – and that remains the overarching trend. Laphroaig, though a lot less likely than Johnnie Walker to be the house pour (for obvious reasons), is the go-to smokey scotch of a list that includes four peated malts.

Almost half of bars polled suggested it was within their three most-used scotch whiskies. Macallan is one of the few malts of a million cases (give or take) and competes with Glen ddich and The Glenlivet worldwide. In the high-end international bar it is the clear winner in its eld and this year takes the trending title too.Talisker, meanwhile, may be much smaller but, like Laphroaig, has a cult following in the bar trade. We’ve also seen something of a comeback from the other big blends.

Bacardi’s Dewar’s reputation seems to be slowly climbing in estimations and our ranking – where it’s up to h – with cask nishes piquing the interest of bartenders. Chivas likewise has climbed the table up to sixth, putting last year’s bad performance behind it.